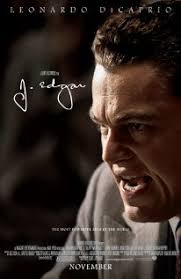 When Hoover began his career at the FBI, evidence from crime scenes was thrown away and most professionals thought fingerprinting was hocus pocus.  To his credit, Hoover essentially created modern law enforcement techniques and built the FBI from the ground up.

But it’s the personal life of J. Edgar Hoover that has always intrigued us. He was a vengeful, racist, egomaniac who blackmailed presidents without skipping a beat and lived with his mother until she died.  J. Edgar chronicles and insinuates Hoover’s personal life with director Clint Eastwood’s usual mastery.  Armie Hammer’s lovely portrayal of Hoover’s companion, Clyde Tolson, is one of the highlights of this movie, and Judi Dench plays Hoover’s mother, Annie, with creepy, arrogant, ease.

I highly recommend J. Edgar, which is available on blu-ray and DVD via the Metro Library Network.