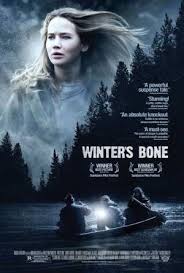 Winter’s Bone is the Oscar nominated drama based on the novel by Daniel Woodrell. The story follows a teenage girl named Ree in the search for her missing father. Ree and her family live in a remote part of the Ozarks, surrounded by a tight-knit community of meth cookers and dealers. Ree’s father has offered up his family’s home for his bond and hasn’t shown up in court, the family could end up homeless and penniless unless Ree can find him. Reluctantly assisted by her Uncle Teardrop, they reveal a side of the Midwest most of us never see. The result is shocking, horrifying, and moving.

This is a beautifully made movie about a very grim subject. There’s a reason it was nominated for four Academy Awards and won best picture at Sundance, the acting is wonderful, the setting is hauntingly atmospheric. This movie isn’t for everyone, it’s unflinchingly brutal but definitely worth seeing.