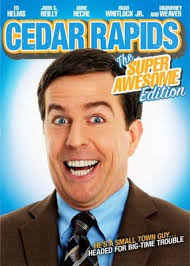 We all heard about the movie Cedar Rapids when it appeared in theaters in February, 2011.  But I, for one, didn’t make the time to see it until recently.  I’m glad I finally decided to sit down and watch it.

This movie is not for everyone.  It’s rated R for “free–flowing vulgarities and alcohol, illegal drugs, a busy prostitute and a few thrown fists.”  Oddly enough, it’s also about the extraordinary nature of an ordinary, decent man.