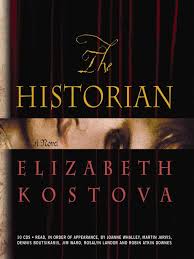 The Historian is  different from the vampire novels coming out over the last few years, don’t look for any paranormal romance here. As the title suggests, it is much more of a historical novel than anything else. The story follows three generations of  historians trying to unravel a mystery that leads them to uncovering the origins of Dracula. A graduate student named Paul finds a mysterious old book in his office, he takes it to his adviser, who shortly disappears and leads Paul on a desperate chase to find him. The chase takes him all over the world, through ancient cities and libraries while being chased and threatened by sinister characters.

The plot isn’t fast paced, fans of historical fiction will appreciate this more than fans of traditional horror. The result of all this is a very creepy historical thriller. I’m rarely ever frightened by books but this one had me checking my locks and windows.  Despite the search for Dracula, the monster himself remains elusive, as I think he should be. Kostova doesn’t fall back on overdone horror tropes, she seems to have learned the lesson that the monster is always scarier when you don’t know where he is.